If you have stumbled upon this article, you are most probably looking to diversify your taste in coffee or looking to educate yourself about the various coffees available at your local coffee shop. Regardless of the reason, we will make sure that you get your answer by the end of this comparison of Cortado vs Flat White:

Both Cortado and Flat White are espresso-based drinks, which can look very similar at a glance. If you want to switch up from the regular lattes, while still getting the classic espresso hit, try out the classier Cortado or the refined Flat White. Read on to find out what makes them different from each other, and which beverage can be your next go-to order.

Cortado is made with espresso and steamed milk, similar to other espresso-based drinks. However, what makes it different is the espresso to milk ratio, which is equal in quantity, and the absence of any foam or froth. The steamed milk helps temper the espresso’s acidity while preserving the boldness of the flavor.

In fact, the word “cortado” means to cut or diluted in Spanish. The Spanish people used milk to counterbalance the acidity of the espresso. Thus, Cortado came into origin in Spain and later appeared on café menus across North America.

Flat White is also a concoction of espresso and steam milk, but it has more milk than the Cortado. The warm drink has a thin, silky layer of white foamed milk, which gives it its signature velvety texture. It has an intense espresso flavor, combined with the characteristic creaminess of the milk, to make every sip luxurious.

The origination of the Flat White is disputed as some believe that it hails from Australia, while the New Zealanders claim that the modern form of the drink was developed in Wellington. However, most people agree that it originated in the 1980s and has only recently become popular in North America.

The Flat White is served in a small tulip cup, which is around 5.5 ounces in size. You can also find a larger serving of around 8 ounces in the United Kingdom.

Let’s look at the similarities and differences between Cortado and Flat White:

The two drinks, Cortado and Flat White share quite a few similarities:

The primary difference that sets the Cortado and Flat White apart is the milk used in them, which also affects the flavor. Here is how the milk makes the two hot beverages differ:

The milk for Cortado is steamed lightly enough to give it somebody rather than create froth. Contrarily, the milk in Flat White is micro-foamed to create an intriguing texture. As a result, Flat White has a silkier, slightly heavier mouthfeel while Cortado is smooth.

Both Cortado and Flat White have the same amount of espresso, which gives them a strong coffee taste. However, the lesser quantity of milk in Cortado gives it a more pronounced coffee flavor than the Flat White.

If we compare a Cortado and a Flat White that were prepared using the same milk, the Flat White has more calories than the Cortado because of its higher milk content. However, according to Starbucks’ nutritional information, the difference is not too great to affect your overall calorie intake in a day.

Cortado is cooler in terms of temperature than Flat White. This is because the milk for Cortado is slightly steamed while milk in Flat White is heated for a longer time to create the characteristic foamy layer on top of the coffee cup.

Should You Drink a Cortado or a Flat White?

Both Cortado and Flat While pack the same caffeine punch but have different tastes and textures. So, it all boils down to how you define your perfect cup of Joe. Of course, you can always try both and make your choice, but if you are wondering which one to order first, here are a few things to consider:

Sipping on a cup of Cortado allows you to experience the robust taste of the caffeine, in addition to feeling it in your system. However, you may miss out on the velvety texture of Flat White. Regardless, both these beverages give you a chance to explore and enjoy the latest varieties of coffee and give you a break from the lattes. 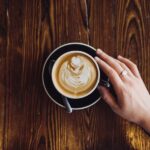 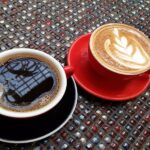 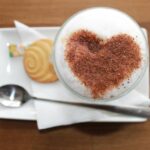