Is Coffee a Legume?

We often use the word ‘coffee beans’ to describe the seeds of the coffee plant. Understandably, this can be confusing when it comes to classifying coffee. In particular, most people assume coffee is a legume because it’s often called a ‘bean’. So, is coffee a legume?

Is Coffee a Legume?

No, coffee is not a legume.  This is because coffee belongs to the family of plants known as Rubiaceae, whereas legumes are members of the Fabaceae family. While both families are in the order of Fabales, they are not closely related.

A coffee bean is actually just a seed inside of the coffee fruit, also called a coffee cherry. The coffee plant produces these fruits, which contain two beans each. Once the cherries are harvested, the beans are extracted and roasted to create the coffee we know and love.

What Exactly Qualifies as a Legume?

To better understand whether coffee is a legume or not, we first need to understand what exactly a legume is. Botanically, a legume can be a whole plant, its fruits, or just the seeds.

Legumes typically have a pod that splits open to reveal edible seeds. These types of plants are often referred to as pulses, which include foods such as beans, peas, and lentils. Generally, legumes belong to the family  Fabaceae, also known as Leguminosae or the bean/pea family.

While coffee does produce pods that contain seeds, it’s not considered a true legume because it belongs to the Rubiaceae family of plants. So, although coffee may be commonly referred to as a ‘bean’, it is not a legume in the botanical sense of the word.

What Is Coffee Then?

So, if coffee is not a legume, what exactly is it? It depends on your definition of the word coffee. Are you referring to the whole coffee cherry or just the beans?

The coffee cherry is a type of fruit that contains two seeds, which we know as coffee beans. These fruits are found on the coffee plant, which is a flowering shrub that belongs to the family Rubiaceae. This family also includes other plants such as gardenias and cinchona.

Therefore, we can say that coffee is a type of fruit. However, when most people refer to coffee, they are actually referring to the roasted seeds (beans) that come from the fruit.

What Coffee Is Not

Already, we know that coffee is not a legume. However, the confusion does not end there. Based on the description we gave, some people might still think coffee to be a:

Coffee Is Not a Nut

Although it has a hard shell, coffee is not a nut. For starters, nuts only have one seed inside.  Coffee, on the other hand, has two seeds in each fruit. Furthermore, although coffee beans may have a shell on them, it is fairly easy to break. Real nuts have a hard shell that is difficult to crack.

Coffee Is Not a Bean

While many people refer to coffee as a bean because of its shape and size, this is actually not the case. As we learned earlier, coffee belongs to the family Rubiaceae, whereas beans are members of the Fabaceae family.

Coffee Is Not a Fruit

Coffee beans come from coffee fruit, they are not fruits themselves. So when you describe coffee beans you cannot refer to them as fruits. They are just seeds.

However, the outer part that houses the coffee beans is a fruit. In fact, some can eat the cherry as you would eat fruits.

Coffee Is Not a Berry

As we learned earlier, a berry is actually just any type of fruit. While coffee comes from a fruit, the coffee bean is not a berry itself.

Coffee Is Not a Vegetable

So since a coffee tree is flowering, we cannot classify coffee beans as vegetables.

Does Coffee Count as Beans?

No, coffee does not count as beans. This is because coffee belongs to the family Rubiaceae, whereas beans are members of the Fabaceae family.

Is Coffee a Food or Beverage?

Coffee is a beverage.  While some people may eat the coffee fruit or beans, most people drink it as an end product. Coffee can also be eaten in powder form, although this is not common.

So, is coffee a legume? No, coffee is not a legume. As we have seen, there are several factors that disqualify coffee as a legume. For instance, it belongs to the family Rubiaceae while legumes are generally members of the Fabaceae family. Additionally, coffee is not a nut, bean, fruit, berry, or vegetable. It is simply a seed inside a fruit known as a  coffee cherry, which grows on a shrub. 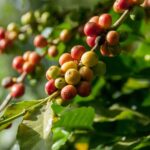