If you are a coffee lover, then you have probably asked yourself this question at some point. Is vanilla syrup the same as vanilla extract? Both of these ingredients are used to add flavor to coffee. Continue reading for more information about vanilla syrup and extract!

Vanilla syrup is thicker than vanilla extract because of the sugar in it. If you’re looking for a thinner flavor in your coffee, you should use vanilla extract.

How Is Vanilla Syrup Made?

The main ingredients used in making vanilla syrup are granulated sugar, water, and a little bit of pure vanilla. Sometimes, the vanilla syrup adds a pinch of salt and brown sugar to get a more enriched flavor.

The process of making vanilla syrup is very simple. The sugar and water are heated until the sugar dissolves. Then, the vanilla extract and any other desired ingredients are added, and the mixture is simmered for a few minutes.

Once it has cooled, the syrup can be stored in a bottle or jar in the fridge. You can make vanilla syrup at home or purchase it at most grocery stores.

How Is Vanilla Extract Made?

Vanilla extract is made by soaking vanilla beans in alcohol. This process extracts the flavor from the beans and infuses it into the alcohol. Vanilla beans are the fruit of an orchid plant.

They are long and thin and have black skin and a white interior. Vanilla beans are expensive because they are difficult to harvest. The flavor of vanilla beans is very strong, which is why they are often used in baking or in making extract.

The longer the vanilla beans are soaked, the stronger the flavor will be. Vanilla extract can be made at home, and it is also available for purchase at most grocery stores.

How Is Vanilla Syrup and Vanilla Extract Used?

Vanilla syrup is often used in coffee drinks. It can be combined with other syrups to create delicious flavors. For example, you could combine the vanilla syrup with hazelnut syrup to create a Nutella latte.

If you want to use the extract in your coffee, You can start by adding small amounts of vanilla extract to your coffee and then adjust the amount according to your taste.

How to Add Vanilla Syrup to Your Coffee

Vanilla syrup is easy to add in your coffee. Just add a few drops to your cup of coffee, stir and enjoy! You can also add it to your coffee machine when you’re brewing a pot of coffee.

Most coffee shops have a standard amount of teaspoons or vanilla syrup pumps they add to the coffee. However, you can always ask for more or less depending on your personal preference.

Is Vanilla Syrup the Same as Vanilla Essence?

What Can I Use if I Don’t Have Vanilla Syrup or Extract?

If you don’t have vanilla syrup or extract, then you can use other types of syrups or flavors. You can try using spices such as cinnamon or nutmeg to add flavor to your coffee. Experiment with different combinations until you find the perfect flavor for you.

No, vanilla extract is not unhealthy. However, it is high in alcohol content. Both vanilla extract and syrup products are low in calories of around 290 calories per 100g and sugar, making them a healthier option than many other sweeteners.

How Much Alcohol Is in a Teaspoon of Vanilla Extract?

Vanilla extract is not an ingredient you would want to use in large quantities. One teaspoon contains about 40% alcohol, and it can quickly overpower the flavor if used too much or left to sit in your coffee for long. 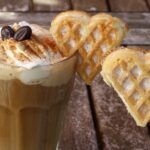