What Is a Long Shot Espresso?

What Is a Long Shot Espresso?

A long shot of espresso is an espresso coffee that uses more water in its recipe. During preparation, you change the amount of water you would use for your regular coffee. In this case, you use double the water quantity for the grounds, which leads to a larger and smoother coffee.

This type of espresso has more caffeine than your run-of-the-mill shot. There is more water and longer extraction times in the brewing process. The result is that stronger sour coffee notes have enough time to break down, making your espresso taste more intense!

Other Names for a Long Espresso

Have you ever heard someone in front of you in a line at Starbucks order a lungo and wonder what it is or what it tastes like? Well, it refers to the same thing—an espresso brewed with more water.

How Does Coffee Lungo Taste?

How a coffee lungo tastes largely depends on the brewing process. A well-made long espresso shot has a similar taste to a regular espresso. The only difference is that it is larger in quantity and slightly bitterer.

The long-brewing process extracts the highest amount of flavor from the coffee beans. More flavor is pulled from the coffee grounds, leading to a sophisticated caffeine-rich drink.

The ideal ratio for a lungo espresso is 1:3. That means you use two times as much water as espresso grounds. For example, if you use 1.5 ounces of ground coffee for a doppio, you’d use 3.0 ounces for a lungo.

There are two methods of making a lungo. The first method involves filling your small “tulip” shaped cup with eighty percent hot water. Grind the coffee beans in a portafilter, tamp them, and later level them off evenly. The last step is to insert the portafilter into the coffee machine. Pull the coffee shot over your prepared cup of hot water.

The second method is known as “double-dosing.” This method aims to pull your normal amount of espresso, then add a dose of hot water to compensate for the volume lost during the steaming process.

A ristretto is a short espresso made with finely ground coffee and a small amount of water. The result is an intense and rich flavor. Ristretto is the Italian word for “restricted” and refers to the extraction time for this drink being shorter than usual. It’s typically made using a double shot (2 ounces ) of espresso although it can be made with any size cup or mug.

Ristretto uses less hot water, resulting in a smaller drink, which is sweeter with a richer taste. Ristretto shots have more flavor compounds and a delightful aroma.   Compared to the two types of coffee, ristretto is less bitter, more full-bodied, and has less caffeine than a lungo.

How Many Ounces Is a Long Espresso Shot?

The standard size for espresso is 1 ounce or less than 2 tablespoons of liquid packed with 0.3 ounces of ground coffee. In contrast, a coffee lungo uses about 2 ounces of liquid for the same quantity of coffee.

You’ll notice that these measurements are not equal to the size of the actual cup, which has a typical volume of 6-8 oz. This espresso can range from 1/4 to 1/3 of your cup (if you order a large). A double will be about half as much again, and a triple will fill it up entirely!

How Much Caffeine Is in a Long Shot?

The amount of caffeine in a lungo depends on the coffee blend. It ranges from 70 to 100 milligrams (mg). That’s twice as much as a regular 8-ounce cup of coffee, which has about 35 mg.

What Is a Long Shot of Espresso at Starbucks?

A lungo at Starbucks is 1.5 ounces. It has about 75 mg of caffeine, which is the same amount as an 8-ounce cup of drip coffee or a 20-ounce bottle of soda. You can ask for a small espresso in a cup of water if you want to avoid caffeine.

The answer to the question “what is a long shot espresso” is: an espresso with double the amount of water. This espresso comes with various cultural heritage and terms to describe it across the world. If you have an insatiable espresso craving, we suggest you try coffee lungo as it is larger and more caffeinated. 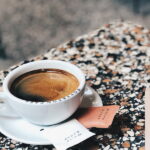 Is Ristretto Stronger Than Espresso? 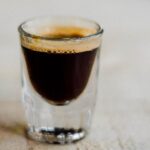 How Long Does an Espresso Shot Last?