Espresso and black coffee are two of the most prominent names in the world of coffee. They start the day of millions of people around the world and are a part of virtually every coffee drink recipe. However, they are often mixed up, so, is espresso black coffee?

No, espresso is not black coffee. While they share a few similarities, they are quite different still. Black coffee is the regular coffee with nothing added to it such as milk or cream. Espresso, on the other hand, is a thicker, stronger, more potent shot version of coffee.

Espresso beats its counterpart by almost every comparison metric. This is the reason why it has gained widespread popularity in the world of coffee. It has inspired and still inspires several desserts and drinks. A major distinguishing factor between both brews remains the satisfying, rich taste that espresso boasts.

How Does Espresso and Black Coffee Differ?

Most people spot the differences between these two beverages right away thanks to their contrasting tastes and appearance. However, there are a number of major factors that set them apart in spite of the fact that they can be made from the same coffee beans type. Some of these factors include:

The most significant difference between both beverages has to be the mode of preparation. To make espresso, very hot steam is forced through finely-ground coffee beans for less than a minute. This gives off a thicker than normal liquid with a crema forming on the surface.

On the other hand, you make black coffee by running hot water over the ground roasted beans in a filter. The ground beans for this brew are usually more coarse. It can take between 5 to 15 minutes, sometimes less, to brew the beverage from scratch to finish.

You can make both espresso and black coffee with any type of bean at varying roast levels, light, medium, or dark. The former is traditionally made using dark roast coffee beans while the latter is usually made from medium roast beans. The darker the roast, the lower the caffeine content and acidity level.

Usually, espresso is made using a variety of beans. This helps to enhance the flavor profile while reducing the acidity level. Black coffee does not usually have this range of flavors because the brewing process restricts the development of these flavors.

Espresso and its counterpart are served in different sizes because of their strength and potency. The espresso is typically served in shots of one ounce while coffee is served in cups which are about 8 ounces. Shots of espresso are often added to coffee, sometimes as many as three to four shots.

Espresso is also used to form the base for drinks like caffé mocha, cappuccinos, lattes, and Americanos. You can even choose to drink your espresso alone without having it mixed with creamer or with milk, such as Flat Whites or Cortados.

On the other hand, a shot of espresso is an average of 2 ounces and contains around 0.00266 ounces of caffeine. This shows that an ounce of espresso contains more caffeine than an ounce of black coffee and is stronger.

The roast coffee beans used for making espresso are finely ground to give a sand-like texture while those used for its counterpart are more gravel-like. The grind size directly affects the amount of caffeine that can be extracted.

Is Black Coffee Healthier than Espresso?

Yes, black coffee is healthier than espresso. In addition, it is healthier than almost every other type of coffee. This is mainly because there are no additives. Espressos are typically served with syrup, milk, and sprinkles. However, plain espresso is still very healthy as it contains magnesium, calcium, and potassium like most coffee.

Does Espresso Wake You Up Faster than Black Coffee?

Espresso and its counterpart are slightly similar on some fronts, however, they do have their differences as well. They differ in the way they are prepared, their tastes, and even the level of caffeine they contain. They are also brewed differently and are consumed in different quantities. Ultimately, the choice is up to you to choose which you prefer. 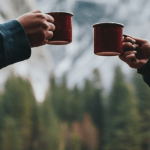 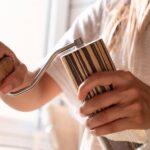