Why Do Coffee and Chocolate Taste Similar?

Why do coffee and chocolate taste similar? You probably thought to yourself, “Chocolate and coffee are two entirely different substances!” Well, your taste buds are correct. They’re commonly associated with the bitter, aromatic stimulant known as caffeine. There’s more under the surface of these two delicious treats.

Why Do Coffee and Chocolate Taste Similar?

Coffee and chocolate taste similar due to identical flavor compounds that are common to both plants. These chemicals include caffeine and phenylethylamine (PEA), a neurotransmitter that gives them their earthy flavor. In addition, both coffee and chocolate seeds are fermented, dried, and roasted.

Coffee also contains antioxidant polyphenols called flavanols (as does dark chocolate). Flavonols are not only antioxidants; they are also anti-inflammatory agents that may help prevent cardiovascular disease when consumed regularly — especially when combined with exercise and a healthy diet!

The combination of coffee and chocolate is one of life’s greatest pleasures. It’s a pairing that has been enjoyed for centuries, so why exactly do these two flavors taste so alike?

The similarities between coffee and chocolate begin with the beans themselves. Both are made from the seeds of tropical plants called coffee and cacao trees, respectively.

These seeds grow into fruit pods that contain the seeds — cacao pods for chocolate and coffee berries for coffee — which are then dried out and separated from their skins before being processed into products like cocoa powder or ground beans, respectively.

One of the main reasons that coffee tastes like chocolate are the roast level of the beans. Coffee beans come in many different shades of brown, ranging from light to dark. The darker the roast, the more bitterness will be extracted from the beans during roasting.

This means that if your coffee tastes like chocolate, it is likely roasted longer than usual or at a higher temperature than average.

The best way to roast chocolate-flavored coffee is somewhere between medium and dark. The beans should be well-developed though not burnt on the outside or excessively oily inside. You should have some of these flavors: nutty, earthy, toasted cacao nibs.

The geographical region where the coffee was grown contributes to its chocolatey flavors. The coffee tasters wheel highlights most of these flavors. Beans from Colombia, Guatemala, and Brazil grew at lower altitudes have chocolate flavor notes, which makes them ideal for those seeking flavor notes.

The East African coffees from Uganda, Kenya, and Ethiopia, on the other hand, still have a fruity and sour flavor if you don’t want chocolate flavor in your cup.

How to Pair Coffee and Chocolate?

Coffee and chocolate are a classic combination, though it’s not an easy one to master.  If you want to try them together, the trick is finding a balance between the two flavors:

The first thing to consider when pairing coffee and chocolate is the acidity of your coffee. Acidity can come from several sources. For example, if you brew your coffee with a French press or a siphon brewer, there will be more acidity in the cup because these brewing methods tend to produce higher levels of CO2 during extraction.

Acidic coffees are great as long as they’re balanced by something sweet (like chocolate).

The texture of the coffee and the chocolate can make a big difference in how well they go together. For example, dark chocolate has a smoother texture than milk or white chocolate, which makes it better suited for pairing with light roasts such as French press or drip coffee.

The chocolate-coffee pairing can be enhanced by adding a splash of cream, milk, or other dairy product to the mix.

This is the most classic pairing. The rich, dark flavors of both the chocolate and espresso complement each other beautifully. If you want something more sophisticated than hot chocolate, this is it!

This is another easy pairing that doesn’t require much thought. White chocolate has a mild flavor that goes well with instant coffee powder, which is also mild in flavor. You can also add some cream to make this a mocha latte or cappuccino.

Are Chocolate and Coffee the Same?

Chocolate and coffee are not the same. Chocolate is made from cocoa beans that grow on trees in South America and West Africa, while coffee beans are harvested from coffee plants, which are woody evergreens that can reach 32 feet in height.

What Type of Coffee has Chocolate in it?

While you can get coffee that is flavored with chocolate, there are coffee beans from certain countries that have notes and hints of chocolate in them. For example, you can find this in beans from Brazil or Vietnam.

Coffee and chocolate taste similar because they share many of the same chemicals. They also have similar production processes, including roasting and being grown at similar altitudes. To pair coffee and chocolate together, one has to consider texture, flavor, and acidity. 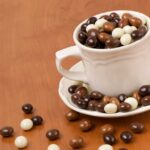 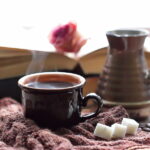 Is Coffee and Chocolate Made From the Same Bean?